A Pregnant Cat was Found Dumped in a Bin with it’s Intestines Hanging Out; A Miracle Story of Survival Against All The Odds

Royal Society for the Prevention of Cruelty to Animals

The RSPCA is trying to trace the owners of a Cat who was found by a member of the public dumped in a wheelie bin in Merthyr Tydfil with severe injuries.

As well as the shocking adnominal injury which had left her intestines hanging out, the young tortoiseshell cat also had serious lacerations to her tail.

The Cat – who has since been dubbed Hope – was otherwise in good body condition and had a pink leopard print collar with a bell but was not microchipped.

The RSPCA believes she may have been injured and then deliberately dumped in Lupin Close, Merthyr Tydfil, on or around 9 April.

“The person who found the poor cat only discovered her because they heard her miaowing. It is amazing she still had the strength to cry, as she was so badly injured she couldn’t even move,” said RSPCA inspector Sian Burton.

“There is no doubt this cat will have suffered extreme pain and distress. To be so badly injured and then dumped in the dark and left to die. It is just awful. 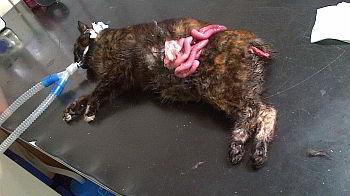 Cat with Intestines Hanging Out

“Her poor owners may be searching for her, and don’t know what’s happened,” she added.

The cat was taken to a vets in Newport, where she underwent emergency treatment, including amputating part of her tail.

While at the vets, they also discovered the poor cat was pregnant. Thanks to swift work by the vets they have managed to keep the kittens in their mum’s tummy, where they seem to be doing well despite the ordeal. 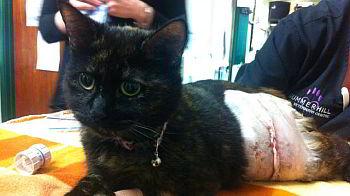 So far she seems to be responding well and it is hoped she may make a full recovery.

The RSPCA is now hoping to trace the cat’s owner, as well as appeal for witness who may have seen what happened to her.

Causing unnecessary suffering to an animal can be prosecuted under the Animal Welfare Act and could face up to six months in prison and/ or a fine of up to £20,000.

Anyone with any information is asked to contact the RSPCA in strictest confidence on 0300 123 8018.

One comment on “Pregnant Cat Dumped in Bin, Intestines Hanging Out” 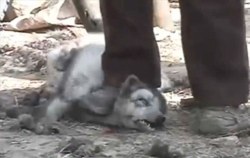 TIME RUNS OUT FOR IRISH DEER